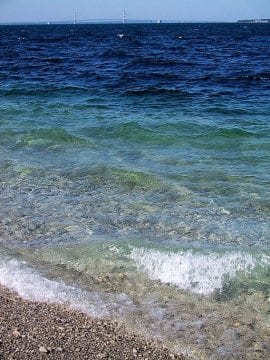 NARF and Earthjustice have teamed up with the Bay Mills Indian Community to fight a proposed oil pipeline tunnel, which would impact communities, local businesses, and the environment. The proposed tunnel would encapsulate oil giant Enbridge’s Line 5 pipeline under the Straits of Mackinac, purportedly to prevent another oil spill. Enbridge was responsible for the largest inland oil spill in 2010 in Michigan’s Kalamazoo River, which resulted in nearly 1 million gallons of oil being released into Michigan’s waterways.

Today Governor Gretchen Whitmer and the Department of Natural Resources (DNR) Director Dan Eichinger notified Enbridge that it will revoke and terminate the 1953 easement allowing the oil giant to operate dual pipelines in the Straits of Mackinac to transport petroleum and other products. This decision comes after years of advocacy and litigation from local tribes and communities that have depended on the Straits for their livelihood.

“We are thrilled and thankful for Governor Whitmer’s decision to revoke the easement for Enbridge’s pipeline to run beneath the Straits”, said President Bryan Newland of the Bay Mills Indian Community. “Enbridge has consistently shown that it only cares about its profits and not about the communities of the Great Lakes. This is a monumental first step in rectifying the harm that the company has already inflicted upon Bay Mills and other tribal nations for decades.”

Background from the Governor’s Office: Today’s action to revoke and terminate the 1953 easement is the culmination of a careful review of Enbridge’s compliance with the easement, the threats posed by the continued operation of the dual pipelines, and the state’s energy supply. On June 7, 2019, the governor issued Executive Order 2019-14, creating the UP Energy Task Force to assess the region’s energy needs and alternative sources of supply. The Task Force issued a report on April 17, 2020. Moreover, on June 27, 2019, the governor directed the DNR to undertake a comprehensive review of Enbridge’s compliance with the 1953 easement. That review is now complete and supports this action.

Today an administrative law judge granted Bay Mills Indian Community the right to intervene in the ongoing pipeline fight uniting tribes, environmental groups and community members against oil giant Enbridge. The decision allows Bay Mills to be a party in the contested case process evaluating Enbridge’s Michigan Public Service Commission’s permit application. “Enbridge’s Line 5 pipeline puts our treaty rights and our way of life at risk every single day,” said Bay Mills Indian Community Chairman Bryan Newland, “We are going to continue to fight to protect our rights, our waters, and our way of life.”

On June 25, 2020, a judge granted Attorney General Nessel’s request for a temporary restraining order, requiring Enbridge to immediately  cease operation of the approximately 4-mile long segment of the Line 5 oil pipeline that crosses the bottom of  the Straits of Mackinac. This decision comes just a week after Gov. Whitmer learned about significant damage to the Line 5 pipeline infrastructure. The State called on Enbridge to disclose all information about the issue. After no response to the state, Nessel then filed a request for a temporary restraining order to cease operations until the state can conduct a full review and examine all documentation. Enbridge later refused to provide Bay Mills Indian Community (BMIC) and other tribes with information on what went wrong, placing the treaty-protected waters at risk.

In its order, the judge wrote, “the severe risk of harm that may result from Defendants’ operation of the West Line  . . . is so substantial and irreparable, and endangers so many communities and livelihoods and the natural resources of Michigan, the danger far exceeds the risk of financial loss to Defendants.”

BMIC has been on the frontlines of this fight for years and recently teamed up with Earthjustice and the Native American Rights Fund (NARF) in order to defend its treaty-fishing rights, and culture and traditions.

“The court’s decision today was a great step forward in protecting our Great Lakes from this uniquely dangerous pipeline. Bay Mills will not stop until this threat to our waters and treaty rights is removed.  In addition, this situation shows once again that Enbridge cannot be trusted to safely operate any pipeline,” said Bryan Newland, Bay Mills Indian Community tribal chairman. “Enbridge continues to withhold information from us, from regulators, and from the public. We want to know what they’re hiding and why they’re hiding it.”

According to NARF Staff Attorney David Gover, “The court’s decision to put a hold on the damaged Enbridge pipeline is absolutely right. Both the state and the Bay Mills Indian Community are still waiting for information from Enbridge as to what exactly happened last week. The pipeline poses a real threat to the tribe’s water and lifeways. The people deserve to know the risks that Enbridge is taking with their homelands.”

On May 11, NARF and Earthjustice teamed up with the Bay Mills Indian Community to fight a proposed oil pipeline tunnel, which would impact communities, local businesses, and the environment. The proposed tunnel would encapsulate oil giant Enbridge’s Line 5 pipeline under the Straits of Mackinac, purportedly to prevent another oil spill. Enbridge was responsible for the largest inland oil spill in 2010 in Michigan’s Kalamazoo River, which resulted in nearly 1 million gallons of oil being released into Michigan’s waterways.

On behalf of Bay Mills Indian Community, NARF and Earthjustice attorneys filed a Petition to Intervene to participate as a party in the Enbridge Line 5 Tunnel Project proceedings before the Michigan Public Service Commission. They also will submit comments, on behalf of Bay Mills, opposing Enbridge’s request  to issue a declaratory ruling. The oil giant is claiming that, due to the original 1953 Easement under the Great Lakes, the project can now skirt any additional review by the Commission—including any review of environmental impacts. The public is able to submit comments on the request for declaratory ruling till May 13, 2020.

“It is extremely important for Bay Mills Indian Community to take up this battle against Enbridge” explained Whitney Gravelle, In-House Counsel for Bay Mills Indian Community. “Since time immemorial, the Great Lakes have been an integral part of Bay Mills’ way of life, and they will continue to be an integral part of tribal culture, tradition, and economy for many generations to come. By failing to consider the dangers Line 5 poses to treaty-fishing rights, cultures, and traditions of the Anishinaabe, we risk killing the heart of Turtle Island, the heart of North America.”

“With their application to move a section of the Line 5 pipeline to a tunnel dug under the Straits of Mackinac, Enbridge proposes a significant project that could have extreme impacts on the area’s waterways and wildlife,” NARF Staff Attorney David Gover explained. “The Bay Mills Indian Community relies heavily on fishing in the area, and the tribe has a treaty-protected right and a responsibility to keep the region’s fisheries healthy and available to tribal citizens. Over the years, the tribe has consistently fought to protect their fishing and hunting rights. Today’s filing continues that fight. The Native American Rights Fund is proud to stand with the Nation to ensure that the Bay Mills Community’s fishing lifeways and tribal homelands are adequately protected for generations to come.”

“Bay Mills consistently has voiced its concerns about the continued operation of Line 5 through the Straits of Mackinac and across other ceded territory in Michigan where it holds treaty- protected rights” said Gussie Lord, Director of Tribal Partnerships at Earthjustice. “We are pleased to expand our presence in the Midwest and stand with Bay Mills in defense of the Great Lakes—the largest freshwater system in the world—and the incredible and complex ecosystems that have sustained the Anishinaabe people for generations.”