The Crow Tribe secured recognition of its hunting territory in the Fort Laramie Treaty of 1851 and secured the right of its members to hunt within that territory in the Fort Laramie Treaty of 1868. However, for more than a century, the State of Wyoming refused to recognize Crow Tribe treaty hunting rights. The question finally reached the U.S. Supreme Court, which held in 2019 in Herrera v. Wyoming that the Crow Tribe’s off-reservation treaty hunting rights remain intact.

On December 3, 2021, the Wyoming District Court for the Fourth Judicial District held that Crow Tribe treaty hunters may assert their treaty rights as a defense to prosecution. The decision from Judge John G. Fenn rightly held that the U.S. Supreme Court’s decision changed the legal landscape, and that the Wyoming could no longer prevent Crow Tribe hunters from asserting their treaty rights based solely on older, lower-court decisions.

Judge Fenn’s decision also held that an earlier court case in which Wyoming argued that it needed to enforce hunting laws against Crow Tribe treaty hunters for conservation purposes no longer applies because of the passage of time and changes in those hunting laws. If Wyoming wants to continue to prosecute Crow Tribe hunters in the Bighorn National Forest, it will need to prove either that he was hunting in a part of the Forest that was “occupied” for purposes of the relevant treaties, or that enforcement of Wyoming’s laws is still required for conservation purposes (or both).

“This obviously is a big win for the Crow Tribe, and for the continued vitality of treaty hunting,” said NARF Staff Attorney Dan Lewerenz, who represented the Crow Tribe as an amicus curiae in this case.  “We sincerely hope that this is the end of the story—that the State of Wyoming will not appeal, but instead will give the Crow Tribe and its treaties the respect they deserve.”

NARF is proud to represent the Crow Tribe in defense of its treaty hunting rights.  NARF was assisted in its representation by Bailey B. Lazzari of Lazzari Legal in Lander, Wyo., and by the Tribal Justice Clinic at the University of Arizona James E. Rogers College of Law.  The case is Herrera v. Wyoming, No. CV 2020-273 (Wyo. Dist. Ct. 4th Jud. Dist.).

Despite an 1868 Treaty providing that the Crow Tribe retained the right to hunt off-reservation on certain lands ceded by the Crow Tribe pursuant to that Treaty, the State of Wyoming cited Crow Tribal citizen Clayvin Herrera for hunting elk in the Bighorn National Forest. The Wyoming courts sided with the State and convicted Herrera of violating state game laws in 2015, but in a 5-4 decision issued today, the US Supreme Court remanded the case back to the state court, and affirmed that the tribe’s treaty-based hunting rights remain in effect. NARF represented the Crow Tribe as amicus curiae in the case before the United States Supreme Court.

Crow Chairman Alvin Not Afraid, Jr., commented on the decision, “This day marks a victory for the Apsaalooke and for all treaty tribes, as our off-reservation hunting rights have been upheld by the Supreme Court of the United States. Our right to hunt in the Big Horn mountains—on the current day reservation or beyond—was important to our ancestors, is important to us today, and will be important to our children and their children. We look forward to seeing the State of Wyoming finally respect our 1868 Treaty Rights.”

According to NARF Executive Director John Echohawk, “The Court’s decision simply does what is right and recognizes that the Crow Tribe’s treaty-guaranteed hunting rights continue to exist to this day. It ensures that state governments know that the promises that the United States government made to Native Americans, through the terms of our treaties, can’t be erased by state laws.”

Importantly, beyond the particular case of Mr. Herrera’s hunting rights, the decision also affirms that treaty rights are not extinguished at statehood and that they stay in effect until extinguished by the treaty’s terms or repealed by an act of Congress. In the majority opinion, Justice Sotomayor writes, “The treaty itself defines the circumstances in which the right will expire. Statehood is not one of them.” 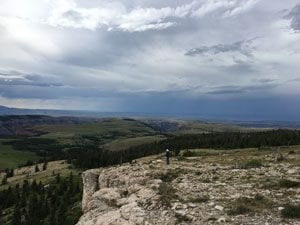 In May 1868, the United States and the Crow Tribe (Apsáalooke) signed the Second Treaty of Fort Laramie. In the treaty, the Tribe ceded a large piece of its reservation lands to the United States. However, tribal leaders reserved the right to hunt on those lands, even though they were no longer part of the reservation. The treaty clearly states  that the Tribe could continue to hunt on the ceded lands, as they always had done, so long as the lands remained unoccupied by settlement and the Tribe maintained peace with the United States. For the Tribe and its citizens, this stipulation was essential because, for many Crow people, hunting was (and still is today) not only a way of life, but also an essential means of survival. The conditions of that treaty are still in force today.

Today, more than 9,000 of the Crow Tribe’s 14,000 enrolled citizens live on the Crow Indian Reservation. Hunting for food and survival is still a vital and necessary part of their culture and way of life.

In 2014, Crow citizen Clayvin Herrera and other tribal members went hunting on the Crow Reservation. They followed a herd of elk from the Reservation into the Bighorn National Forest where they shot and killed three elk, then took the meat back home to help provide food for the winter. Subsequently, the State of Wyoming cited Herrera for illegally taking an elk in the Bighorn National Forest in Wyoming.

Despite the off-reservation hunting rights that had been promised to the Crow Tribe since 1868, Herrera was found guilty by a state court in Wyoming.

Herrera petitioned for certiorari to the U.S. Supreme Court onOctober 5, 2017, and NARF’s client, the Crow Tribe, filed an amicus brief on November 9, 2017. In January 2018, the Supreme Court requested the views of the Solicitor General on the case, and on May 15, 2018, the United States filed its brief recommending that the Court grant the petition and hear the case. The petition was granted at the June 21, 2018, conference.

Now that the U.S. Supreme Court has agreed to hear the case, briefing on the merits of the case is underway (available from the Tribal Supreme Court Project website).  In early September 2018, NARF filed a brief for the Crow Tribe explaining why the Tribe still legally has the right to hunt in the lands that it gave up in 1868.

On September 14, 2018, Crow Chairman Not Afraid released the following statement:

Today, the Crow Tribe submitted its friend of the court brief to the U.S. Supreme Court in the case Herrera v. Wyoming, which involves a Crow Tribal member’s appeal of his conviction for hunting in the Wyoming portion of the Bighorn National Forest, which we believe he has every right to do under Article IV of the Crow Tribe’s 1868 Treaty with the United States.

Hunting is a way of life for the Crow, and the Big Horn Mountains are sacred to our people. So, we believe it’s time that the ongoing wrongs and injustices by the State of Wyoming against Crow Tribal members be addressed, and corrected.

Today, many families on the Crow Reservation still rely on wild game for subsistence, and so the Herrera v. Wyoming case and the Fort Laramie Treaties really are about our very survival. They are about our ability to share our unique way of life with our children, and to continue to practice our values as a people.

The Fort Laramie Treaty of 1868 was negotiated between the Apsaalooke and the United States government just over 150 years ago.  It is still important to our people today, and we are hopeful that the Supreme Court will rule in Mr. Herrera’s favor, and uphold that sacred promise between our nations.

Our ancestors gave up a lot to ensure the survival of our people, and they reserved for us the right to hunt on the lands we ceded, as long as they were not occupied by settlers.  We want to see these promises and the sacrifices of our ancestors honored.