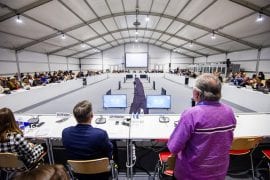 Because of their close connection to the natural world, indigenous peoples are among those most affected by climate change, despite their negligible carbon footprint. Recognizing climate change’s threat to indigenous homelands and ways of life, the National Congress of American Indians and the Native American Rights Fund have joined the community of nations in climate change negotiations at the United Nations Framework Convention on Climate Change (UNFCCC). NARF participates on behalf of its client NCAI as part of the International Indigenous Peoples Forum on Climate Change (indigenous caucus).

Watch NARF Staff Attorney Kim Gottschalk‘s statement on the indigenous viewpoint in Bonn, Germany, on May 3, 2013

On December 12, 2015, at the COP21 (Conference of the Parties 21) in Paris, the 195 participating parties agreed to the first ever universally binding accord on climate change, the Paris Agreement.

In preparation for Paris, the Norwegian government donated funding to enable greater indigenous participation in the process. Regional consultations of indigenous peoples took place in all seven regions of the world and dozens of indigenous representatives from around the world came to Paris, including numerous representatives from United States tribes. This participation was crucial in lobbying for language concerning indigenous issues in the Agreement itself and the Decision adopting it.

The indigenous caucus had several issues which it pushed for inclusion in the Agreement. One of the most important was to get a provision in the operative section of the Agreement recognizing that climate change policies and procedures had to respect, protect, promote, and fulfill the rights of indigenous peoples within a broad human rights framework. The effort resulted in a provision which states:

Acknowledging that climate change is a common concern of humankind, Parties should, when taking action to address climate change, respect, promote and consider their respective obligations on human rights, the right to health, the rights of indigenous peoples, local communities, migrants, children, persons with disabilities and people in vulnerable situations and the rights to development, as well as gender equality, empowerment of women and intergenerational equity

A second issue of importance to the indigenous caucus was the recognition of the importance of indigenous peoples’ knowledge in relation to climate change. To that end, the Paris Decision established a Local Communities and Indigenous Peoples Platform to provide an opening for traditional knowledge to influence climate policy at local, regional, and international levels.

Ultimately, the platform will institutionalize dialogue between states and indigenous peoples, foster indigenous participation in the discussions on environmental policy, and encourage a holistic response to climate change. According to a statement from the UN: