Seeking Ballot Rejection Solutions from the State of Alaska 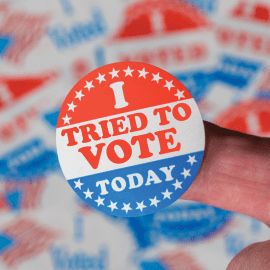 The State of Alaska rejected more than 7,500 ballots in the June 2022 special primary election. About 63 percent of rejected ballots were not counted because of defects that could have been corrected. Rejection rates were significantly higher in rural areas, where percentages of Alaska Native voters are substantially higher.

“The significantly higher rejection rates in rural Alaska reflect disparate impacts on Alaska Native voters who already face increased barriers to voting. It is critical that a meaningful ballot cure process be in place to ensure that the votes of all Alaskans are counted,” said NARF Staff Attorney Megan Condon.

Nearly half the states, as well as the Municipality of Anchorage, have secure elections with a codified process to ensure that the voices of voters are not silenced for a clerical error. But the State of Alaska continues to reject curable ballots year after year despite the obvious disenfranchising impact resulting from a lack of cure.

“No one who makes a good faith effort to vote should have their ballot discarded without having a chance to fix an easily remedied mistake. That is why, as we move towards elections in August, October, and November, we urge you to ensure that all Alaskans who vote absentee can count on their vote counting by promptly notifying voters that their ballot was rejected and why, and providing them an opportunity before Election Day to remedy any curable defects that caused the rejection.”

The groups asked the State of Alaska to inform them within seven days about how it intends to resolve the issue.

In response to the demand letter, Lt. Governor Kevin Meyer and Division of Elections Director Gail Fenumiai issued a joint response on July 27. Instead of implementing a notice and cure process in time for the November general election, the state officials denied responsibility for the issue and failed to provide a resolution.

On behalf of the Arctic Village Council, the League of Women Voters, and two individual Alaskans, NARF, ACLU-AK, and Perkins Coie filed a complaint on August 23, 2022. The complaint states that the state failed to honor the due process rights of voters when they failed to notify voters of clerical errors and rejected ballots without giving voters any opportunity to correct the errors.