NARF joined 12 other national and regional tribal organizations in sending a letter to Secretary of Interior Bernhardt and Secretary of Treasury Mnuchin urging them to ensure that the Coronavirus Relief Fund (CRF) is disbursed directly and exclusively to tribal governments. NARF consistently has held that for-profit Alaska Native corporations are not Indian tribes, therefore they should not receive funding intended for tribal governments.

The undersigned organizations feel obligated to communicate to Secretary Mnuchin the gravity of this decision. This is not a one-off decision that Treasury can make with minimal unintended consequences. Any indication that Congress has recognized Alaska Native Corporations’ “boards of directors” as akin to tribal political governing bodies completely misrepresents the breadth and meaning of tribal governance. This is categorically incorrect and diminishes the stature of federally recognized tribal governments and our sacred government-to-government, nation-to-nation, sovereign-to-sovereign relationship. If this legally unsupported assertion is taken as true by Treasury or any other body of the federal government, it potentially results in a course-changing decision that could have dangerous implications for federal Indian law, as it could irreparably affect how the United States treats and views sovereign tribal governments. 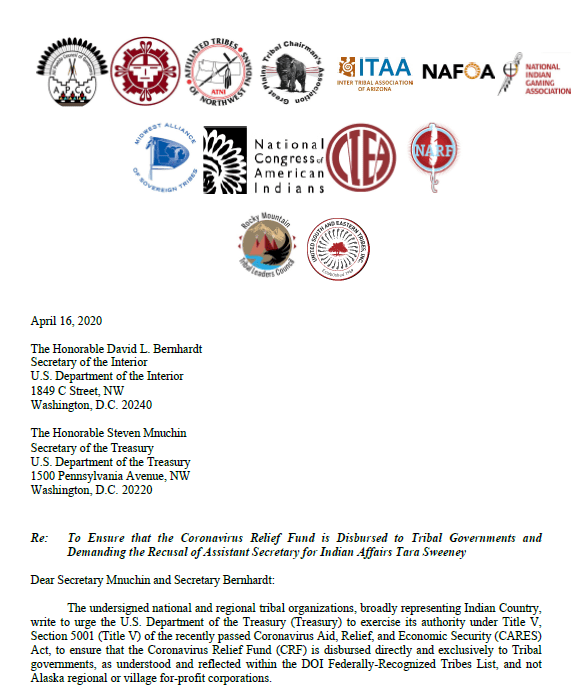