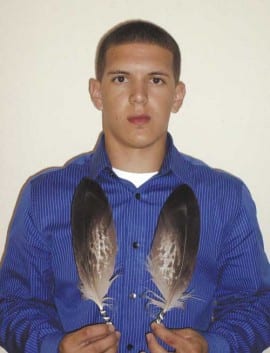 For more on this story, read Native Graduate wins case; walks with feathers

The American Civil Liberties Union of North Carolina (ACLU-NC) and the Native American Rights Fund (NARF) today sent a letter to the Robeson County School District expressing concern over a school system policy for graduation attire that provides no exception for religious and/or spiritual beliefs, resulting in an unreasonable application to one student. That student is Corey Bird, a senior at Purnell Swett High School in Pembroke who is Lumbee and an enrolled member of the Sisseton-Wahpeton Tribe of South Dakota. Bird has been told by school officials that school policy does not permit him to wear an eagle feather during graduation on June 13.

The organizations became involved after the student and his father, Samuel Bird, requested backing from Lumbee tribal leaders, who called the school’s enforcement of its policy in this instance “a disgrace.” The Sisseton-Wahpeton tribe and other American Indian tribes traditionally use eagle feathers for ceremonial purposes. Typically, an eagle feather is given only in times of great honor for example, eagle feathers are given to mark great personal achievement. The gift of an eagle feather to a youth is a great honor and is typically given to recognize an important transition in his or her life. Many young people are given eagle feathers upon graduation from high school to signify achievement of this important educational journey and the honor the graduate brings to his or her family, community and tribe. Corey’s feathers were gifted to him by his father for this occasion, and they have even greater meaning to him because Corey wants to spiritually honor his mother and grandfather, who are both deceased.

The Lumbee Tribal Council passed a resolution of support for Corey to wear the eagle feathers to graduation, but still the school would not budge, prompting the organizations to step in. The following quote can be attributed to Katherine Parker of ACLU-NC: “In addition to being just plain bad policy, the school district’s decision also appears to violate Corey’s right to freely exercise his religion under the First Amendment to the United States Constitution, as well as Corey’s father’s fundamental right to parent under the Fourteenth Amendment. We urge the school district to rethink its short-sighted decision.”

The following quote can be attributed to Steve Moore of NARF: “Given the Native American reverence for eagles, and the high honor represented by a school graduation, we at NARF cannot imagine a more appropriate setting for the dignified wearing of an eagle feather. Most schools in America that have struggled with this issue in the past few decades have understood that permitting the wearing of eagle feathers at graduation is not only good policy but the right thing to do from a human perspective.”

Robeson County is approximately 40% Lumbee, according to the U.S. Census. The Robeson County School Board’s next scheduled meeting is June 10. The organizations look forward to attending along with parents, community members and supporters to address the matter.