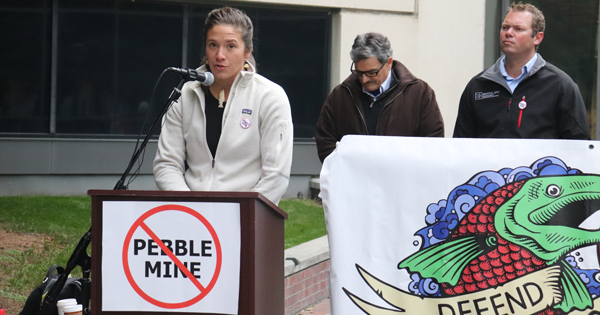 From our tribal clients:

DILLINGHAM, AK – The latest news of Pebble’s duplicitous efforts to get a favorable permit decision confirm what Bristol Bay Tribes and residents have long suspected: the Pebble Limited Partnership has engaged for years in a smoke and mirrors campaign to fool Alaskans and the American people about its project, and it’s time for Alaska’s delegation to step in and protect the region from this corrupt company.

Recently-released videos detail the corrupt level of support that the Pebble Limited Partnership and its parent company Northern Dynasty is receiving from boosters in the state and federal government, and the Alaska Congressional Delegation’s willingness to quietly allow the process to proceed without stopping the project. The videos also show Pebble’s deceptions to the public and potential investors as it seeks to build one of the world’s largest open-pit mines at the headwaters of Bristol Bay’s life-sustaining salmon fishery.

In videos recorded by the Environmental Investigation Agency, Northern Dynasty President and CEO Ron Thiessen and Pebble Limited Partnership CEO Tom Collier outline the company’s efforts to curry favor with state and federal officials to rush the permitting process and avoid the usual standards for a permit decision. The videos also show discrepancies between the plan the company is touting to federal regulators, and their private plans for a much larger mine including plans to share infrastructure with other projects such as Donlin and turn Southwest Alaska into a mining district.

Thiessen and Collier detailed regular meetings between Army Corps top staff and top Pebble employees, and explained how the company uses Alaska Governor Dunleavy to make requests to the White House on their behalf. He also noted that the Army Corps chose to apply a streamlined permitting process to this project, with no authority to do so, to support the company in its efforts. Further, the videos also show that Pebble’s mitigation plan will not meet a rigorous threshold – and that the company has been working hand in hand with the Army Corps of Engineers and State of Alaska on the plan, with both planning to approve it and allow the project to proceed to a Record of Decision in the near term.

Thiessen and Collier’s statements also make clear that Alaska’s senators have been the target of Pebble’s duplicitous efforts.

The tapes also detail clear plans for future expansion, include the admission that the current mine plan is not ready for construction, and contains falsehoods about permitting requirements and local support.

The statements also confirm what technical experts have been saying for years: Pebble’s plan is incomplete and not yet ready for construction, meaning the environmental review is based on a fictional mine plan, not a plan grounded in construction and environmental realities.

United Tribes of Bristol Bay leaders made the following statements:

“It’s disturbing to hear that Alaska’s senators have been playing politics with Bristol Bay. Our region looked to them for help in stopping a toxic mine that could destroy our communities and cultures, and these tapes indicate that they have only paid lip service to our cause, while allowing a corrupt and inadequate review process to continue. It’s time for the Alaska delegation to listen to their constituents, disavow this project, and help stop Pebble once and for all.” -UTBB Executive Director Alannah Hurley

“The fact that state and federal authorities are supportive of Pebble’s efforts to manipulate the permitting process, and aiding the company in its efforts, shows just how rigged the system is. The government is ignoring its responsibility to its citizens and to our sovereign Tribal nations in Bristol Bay, and instead is working hand in hand with a foreign mining company to advance its interests at Bristol Bay’s expense. Pebble wants to permit a fantasy mine that ignores the mining and engineering realities of the mine site, terrain and deposit, and the government is assisting them in doing so. This cannot be allowed to continue. There must be a full investigation into this corrupt permitting process immediately.” -UTBB Executive Director Alannah Hurley

“These videos paint a clear and damming picture of Pebble’s tactics, which Bristol Bay has been experiencing for years. From explicit plans to expand in time, to the ways the company has pulled strings at the state and federal levels to rig the permitting process, and continual mistruths about local opposition and life in Bristol Bay, it is obvious that Pebble is selling the promise of false gold, with no concern for the lives, lands or waters they ruin in the process.” -UTBB Board President Robert Heyano

Read more about the Bristol Bay Tribes efforts to protect their homelands.