Bears Ears Landscape to Be Protected 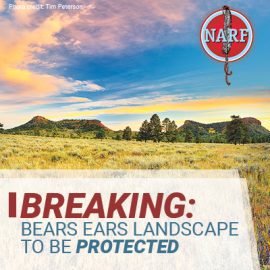 Recognizing the importance of Bears Ears (UT) to the region’s tribal nations—and all people who value the area’s unique history, resources, and features—the Biden Administration is expected to take much-needed action to restore protections for these sacred homelands. In 2016, Bears Ears protections were established after years of negotiations, input, and advocacy on behalf of tribes, states, non-governmental organizations, and the public. Those hard-earned protections were removed in 2017. The area subsequently saw a rash of exploitation and abuse by vandals, commercial interests, and misinformed tourists.

Thankfully, on October 8, 2021, President Biden is expected to sign a proclamation, restoring protections for the Bears Ears National Monument. The Native American Rights Fund represents  the Hopi Tribe, Pueblo of Zuni, and Ute Mountain Ute Tribe, and we applaud this much-needed action.  Importantly, the Bears Ears National Monument was the first national monument proposed by a coalition of sovereign tribal nations. For years, five tribes—the Hopi Tribe, Navajo Nation, Pueblo of Zuni, Ute Indian Tribe, and Ute Mountain Ute Tribe—led the effort to establish the Bears Ears National Monument in an area that is not only rich in history, but is still used for cultural and religious purposes. More recently, the Tribes fought tirelessly against the Trump Administration’s threat to revoke protections for the area. Trump’s revocation of the monument to 15% of its designated size allowed industry and individuals to exploit and destroy a place so wondrous that it has drawn people to it for more than 13,000 years.

NARF Staff Attorney Matthew Campbell reacted to President Biden’s expected action, “President Biden’s proclamation will roll back unpopular and illegal efforts to rip away needed protections for these ancestral lands and cultural resources. The region’s Native Nations joined together and fought long and hard to safeguard Bears Ears. We look forward to seeing one of the country’s most sacred landscapes properly protected, and we look forward to seeing that it happens in a culturally appropriate way.”