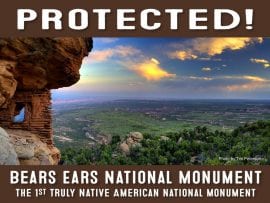 The Native American Rights Fund applauds President Barack Obama’s designation of the Bears Ears National Monument in southeastern Utah. This designation is the first under the Antiquities Act that comes in direct response to an unprecedented partnership of sovereign Native American Tribes.

“In a very real sense, this is a monument to justice as much as conservation. The Bears Ears National Monument protects a living cultural landscape, a place of migration and habitation used by Native Americans since time immemorial.

“This designation marks a significant step towards strengthening tribal sovereignty with a commitment from the U.S. Government to work together with Tribal Nations to manage ancestral lands. This is a dramatically different level of collaborative management with Tribes, ensuring their engagement isn’t merely advisory, but substantive and indispensable.”

Learn more about the fight to protect the Bears Ears National Monument.