On January 13, 2022, an administrative law judge in Michigan excluded valuable witness testimony from the information the Michigan Public Service Commission (MPSC) will consider as it deliberates whether to issue a permit for the proposed Enbridge Line 5 pipeline tunnel through the Straits of Mackinac. In his ruling, the judge granted Enbridge Energy’s request to strike from the record portions of testimony about serious risks that the tunnel poses to public safety, climate change, and Tribal sovereignty.

The Bay Mills Indian Community (BMIC) intervened in the review process to alert the public service commission to threats that a new pipeline tunnel would pose to the Tribe’s food and water supply, medicinal plant species, economic livelihood, and treaty rights. The Tribe has lived along the Straits of Mackinac since time immemorial and retains treaty-protected access for hunting, fishing, and cultural traditions.

Portions of the excluded testimony explained the cultural and spiritual significance of the Straits to the Anishinaabe people and stressed the catastrophic impact an oil spill in these waters would have on every aspect of their existence:

“The Straits of Mackinac is a place of deep spiritual and cultural meaning to my people, where there are important cultural and historic resources still being learned of, and where Bay Mills and other Tribal Nations have Treaty rights,” testified BMIC President Whitney Gravelle. “It is dangerous to construct a tunnel and route a pipeline through lands and waters that are central to our existence as Indigenous people and as a Tribal Nation.”

The administrative law judge also struck a portion of the testimony from BMIC Vice President Jacques Leblanc, a lifelong commercial fisherman who detailed the ecological, economic, and cultural impacts of a spill in the Straits:

“If the Great Lakes ecosystem is harmed, I will have no means to continue supporting my family through treaty subsistence and commercial fishing or harvesting of medicines and animals,” testified BMIC Vice President Leblanc. “Beyond the harm that an oil spill or other event would have on the health of lake trout and whitefish, any disruption of the fishery for an extended period would stifle the transfer of fishing knowledge to younger generations.”

On a positive note, the judge allowed to remain on record the testimony of chemical engineer and pipeline expert Richard Kuprewicz who testified about the serious risk of an explosion in the proposed underwater pipeline tunnel. This means in determining the merit of the project for the public, the MPSC must consider how Enbridge’s proposed design for a Line 5 pipeline tunnel could cause a loss of human life for workers in the tunnel, an oil spill into the Great Lakes, and an environmental catastrophe in the Straits should the volatile mix of fuel and ignition sources encased in a Line 5 oil pipeline tunnel explode. 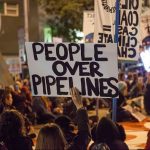 The Native American Rights Fund, in partnership with Earthjustice, represents the Bay Mills Indian Community in the tribal nation’s fight to protect the Straits and the Tribe’s treaty rights throughout waters in Michigan.

“As a public agency, the Michigan Public Service Commission needed to know the critical information these witnesses presented for consideration on behalf of the impacted tribal communities. In the next few months, MPSC will now have to weigh the value of increased corporate profit for Enbridge against the impacts, risks, and damages a Line 5 oil pipeline tunnel would cause for the public, while hearing only part of the story,” said NARF Staff Attorney David L. Gover.

Earthjustice attorney Christopher Clark expressed grave concerns about how the judge’s decision to exclude these vital witness testimonies will hinder the Commission’s ability to properly assess the scope of the tunnel project’s real-world impacts.

“The Commission must evaluate the long-term impact of this project on climate change and on the cultural and historic resources that are indispensable to Tribes”, said Clark. “But the judge struck critical portions of the testimony of experts including Frank Ettwageshik, a tribal leader and leading climate change expert and advocate, and Dr. Chuck Cleland, a renowned ethnohistorian with decades of experience studying the affected area. This is deeply troubling. Despite today’s decision, we are looking forward to making our case to the Commission that the serious and irreversible risks of this project are too great to permit.”

Cross-examination of witnesses before the MPSC began on January 14.

Read More: Bay Mills Indian Community Aims to Stop the Enbridge Line 5 Pipeline System and A Tunnel Under the Straits of Mackinac