Preventing an Oil Spill in the Great Lakes 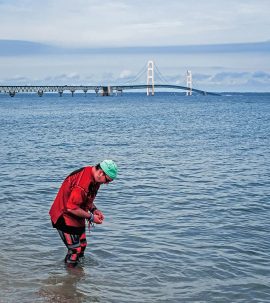 The Native American Rights Fund (NARF) and Earthjustice represent the Bay Mills Indian Community (BMIC) in the tribal government’s fight to prevent construction of a proposed Line 5 oil pipeline tunnel under the Great Lakes. The project would traverse the Straits of Mackinac and put at risk waters, lands, and treaty rights of tribes and the state of Michigan, and impact communities who depend on the health of the Straits of Mackinac and its watershed for their livelihoods and way of life.

“We should not have to continue living under threat of a corporation destroying our communities through an oil spill,” said BMIC President Whitney Gravelle, who noted the project, which Canada and Enbridge want the Biden Administration to support, would put at risk “the source of drinking water to more than 40 million people.”

This past fall and winter Tribal and expert witnesses submitted testimony to the Michigan Public Service Commission (MPSC) about the impacts such a project would have upon tribal communities. In January, however, a judge decided to remove large portions of the testimony, including tribal leader testimony, from the record. This decision means that the MPSC will not hear tribal leaders’ and experts’ full concerns as it determines whether or not to issue Enbridge a permit.

“For years, tribal governments impacted by Line 5 have fought to have their communities’ needs heard and considered,” said NARF Staff Attorney David L. Gover. “All communities in the region stand at risk to lose if the MPSC approves a permit allowing Enbridge to build an oil pipeline tunnel under the Great Lakes and that tunnel and pipeline fail.”

To protect tribal citizens and reservation residents, BMIC banished the Line 5 Project from tribal lands and waters in 2021, citing the corporation’s documented history of oil spills and safety violations. Over the last 50 years, Enbridge’s Line 5 pipeline has spilled more than 1.1 million gallons of oil. In 2010, Enbridge caused the largest inland oil spill, devastating Michigan’s Kalamazoo River. Enbridge spilled over 1.15 million gallons of oil into the river and must continue to report remediation progress to the Environmental Protection Agency (EPA) after a 2017 settlement requiring Enbridge to put Line 5 and the other 13 pipelines in its network into compliance to prevent future oil spills.

In January 2022, Enbridge provided the EPA a report over 300 pages long documenting corrosion, cracks, dents, welding and safety issues that Enbridge must fix on Line 5, Line 3, and other pipeline segments. Each issue in the report stems from an Enbridge safety violation or problem that the corporation did not address until forced to do so by lawsuits. On page 63 of the report, Enbridge reported to the EPA that the states of Michigan, Wisconsin, and Minnesota were in dispute with Enbridge in U.S. courts.

“Every tribe in Michigan has requested the U.S. government join them and the state in working to shut down Line 5 instead of allowing Enbridge to build a new pipeline tunnel under the Straits of Mackinac,” said President Gravelle.

NARF Staff Attorney Wesley James Furlong agrees the unified message of the 12 tribal governments rings in loud and clear. “By now Enbridge should understand that treaties and the application of U.S. law protects tribal governments’ rights to decide what happens to treaty protected lands, waters, and resources and for very specific reasons tribes have said, ‘Hey Enbridge, no Line 5!’.”