On June 2, 1924, in exchange for the right to tax Native people, the U.S. government unilaterally extended U.S. citizenship to Native Americans by passing the Indian Citizenship Act over the objection of some Native Nations. As dual citizens of their tribes and the United States, members of federally-recognized tribes should have been able to register and participate in both nontribal (U.S.) elections and tribal elections.

“Even after the passage of the Indian Citizenship Act in 1924, states and local jurisdictions prevented Native Americans from registering to vote and voting,” said Native American Rights Fund (NARF) Staff Attorney Matthew L. Campbell in May 2021 testimony about how voter ID laws affect Native voters. “Exercising the right to vote only came with protections afforded by the Voting Rights Act and enforcement of those rights through litigation.

Like other U.S. citizens, Native Americans have the same right to a voice. Like other U.S. citizens, Native Americans have a right to decide who should represent them at local, state, and federal levels. However, over and over again, Native people have had to litigate for their right to vote because state governments pass legislation to prevent their participation. Only in 1958, thirty-eight years after the Indian Citizenship Act, could Native voters even participate in all fifty states.

On June 2, 2021, Native people are forced to continue to litigate for their right to vote, as states continue passing legislation to prevent Native people from voting in U.S. elections. “Ninety-seven years later, unfortunately the right of Native citizens to vote is still under attack,” said NARF Staff Attorney Samantha Kelty.

“The state of Montana, for example, has passed several unconstitutional laws in the past year designed to make it harder for Native people to vote,” said NARF Staff Attorney Jacqueline De León, who is leading a case challenging the constitutionally of the latest two Native voter suppression laws in Montana that legislators passed months after courts deemed similar laws unconstitutional in Western Native Voice v. Stapleton. “These laws represent a pattern of Native voter disenfranchisement.”

In a series of field hearings held in 2017 and 2018, NARF heard from voters across Native America about the challenges they faced participating in non-tribal elections. The resulting report, Obstacles at Every Turn, summarizes those widespread and ongoing issues. It makes clear that the fight for Native voting rights is far from over.

Learn more at vote.narf.org, a website about NARF’s work on Native voting rights. The site also shares information with Native citizens and their allies about how to participate in redistricting in 2021 and 2022. Tribal community participation in developing fair voting district boundaries will help Native people receive their fair representation and voice.

How Can I Support Native Voting Rights? 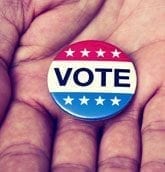 To support Native voting rights, please visit vote.narf.org/redistricting to learn how you can be a leader and an ally in your neighborhood this year as communities across the U.S. work together to create fair voting districts. Please read Obstacles at Every Turn to learn what issues impact Native voters and share this information with others as they think critically about voter reform legislation.

Please educate yourself, your children, and your loved ones about Native citizenship and voting rights. Please register to vote and bring your ideas, critical thought, and vote to every issue.

The Native American Rights Fund thanks you for serving as a mentor on this issue. NARF recognizes the survival of Native people’s ties to their homelands, languages, cultures, religions, and resources for their families depend on their ability to vote in nontribal elections, as outcomes impact their communities.