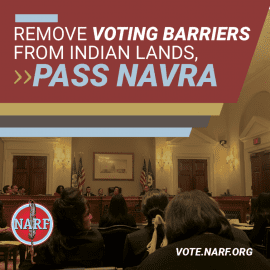 We, as a nation, repeatedly have rejected racist policies that restrict access to the ballot. However, in some states and municipalities, racist policies and voter suppression continue to hobble Native American voters. For fifty years, the Native American Rights Fund has supported Native voters as they fight in courts for equal access to the ballot. Tellingly, in voting rights litigation, Native Americans have won an astounding 90+% of the cases they have brought. Federal action is urgently needed to address abuses at the state and local level and set baseline, consistent voter access on Indian lands.

NARF Staff Attorney Jacqueline De León described, “We have to address ongoing discriminatory policies at the state and local levels. We need a federal policy that sets a baseline of access and prevents continuing abuses. The newly introduced Native American Voting Rights Act helps do that.”

In order to protect the right to vote on Indian lands, any legislation passed must address the distinct issues confronting Native American voters, including: