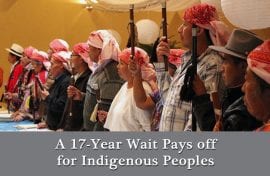 On June 15, 2016, after nearly three decades of work with Indigenous Peoples, the Organization of American States (OAS) adopted the American Declaration on the Rights of Indigenous Peoples. The OAS consists of the 35 independent states of the western hemisphere. Over the years, numerous rounds of negotiation were held, mostly in Washington, D.C., but also in Guatemala and Brazil.

Since the adoption of the United Nations Declaration on the Rights of Indigenous Peoples (UNDRIP) in 2007, the guiding principle during the negotiations was that no standard would be adopted that was lower than the standards contained in the UNDRIP. As a safety net on this issue, Article XXXIX of the American Declaration provides that: “The rights contained in this Declaration and the United Nations Declaration on the Rights of Indigenous Peoples constitute the minimum standards for the survival, dignity, and well-being of the indigenous peoples of the Americas.” The American Declaration goes beyond the UNDRIP in several respects including treaties, the rights of children, and the rights of peoples in voluntary isolation. The American Declaration will be used within the Inter-American Court on Human Rights and the Inter-American Commission on Human Rights to build on an existing body of decisions supporting indigenous rights. NARF has worked on this project with its client, the National Congress of American Indians since 1999, along with indigenous representatives from throughout the hemisphere.