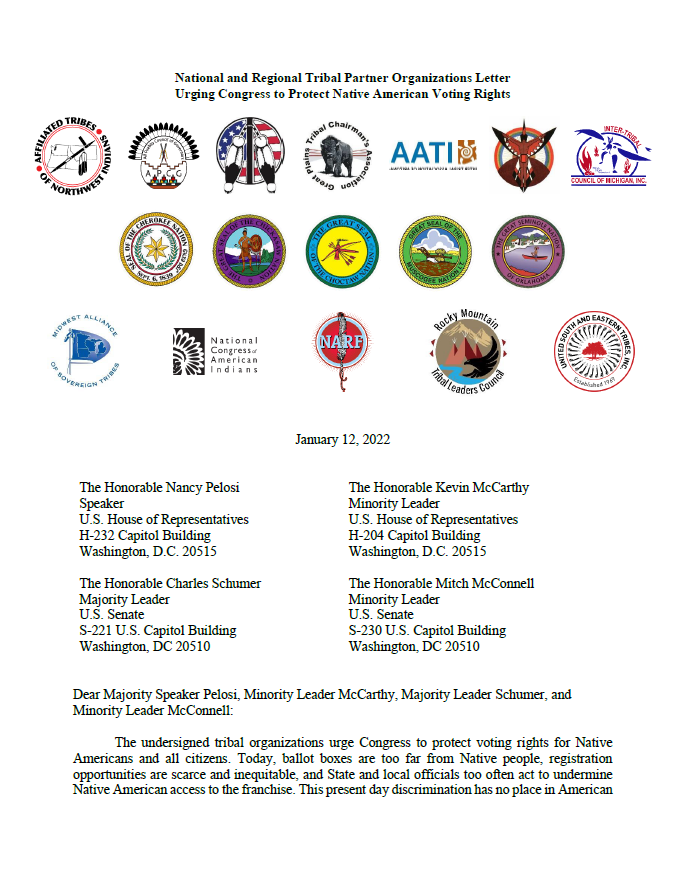 The undersigned tribal organizations urge Congress to protect voting rights for Native Americans and all citizens. Today, ballot boxes are too far from Native people, registration opportunities are scarce and inequitable, and State and local officials too often act to undermine Native American access to the franchise. This present day discrimination has no place in American democracy. Congressional action in fulfillment of Congress’ trust responsibility toward Native Nations is urgently needed to address the fundamental tenet of our democracy – the right to vote.

Because many Native American reservations today are rural with poor infrastructure, state laws increasingly take advantage of our isolated conditions in order to make it more difficult for tribal citizens to vote and the courts have not provided redress. For example, the U.S. Supreme Court’s July 2021 decision in Brnovich v. Democratic National Committee allows the state of Arizona to continue with practices that disenfranchise Native Americans who have to travel upwards of fifty miles to reach a post office to return their ballots. This past election cycle, Pima County spent $180,000 defending its removal of early voting access on the Pascua Yaqui reservation. The early voting location was fully funded by the State, yet the county continued to refuse access.

In order to suppress the Native American vote, state legislatures have also moved to increase barriers. North Dakota required addresses on voter identification when it was well aware the Nat

ive Americans lacked addresses on their homes and therefore, could not comply. And a recent law passed in the 2021 legislative session in Montana prohibiting ballot collection and drop off on reservations that do not have residential mail delivery was described by the Montana Advisory Committee to the U.S. Commission on Civil Rights as “intentional discrimination. . . [that] will increase barriers to voting for Native Americans on reservations in Montana.”

We are facing present-day discrimination that capitalizes on the longstanding inequities and challenges we face every day due to failures in the execution of the federal government’s trust and treaty obligations. Federal legislation is needed to uphold our rights and counter state efforts.

Urgent congressional action is essential to ensure that voting rights across the country are uniformly protected. We applaud the recent legislative efforts like the introduction of the bipartisan Native American Voting Rights Act in both the House and U.S. Senate, and the introduction of a bipartisan version of the John Lewis Voting Advancement Act in the Senate. We also support the Freedom to Vote Act, providing a minimum federal standard of access. It is imperative that voting rights protections make their way to the President’s desk as soon as possible and that any federal action include specific provisions for Native voters. Congress has ample authority pursuant to its federal trust responsibility to protect Native people and their ability to vote.

There are very specific, straightforward actions that can be taken to support access to the polls in Indian Country. Due to the lack of residential mail delivery, poor roads, and prevalence of homes that do not have addresses, it is harder for Native Americans to register, receive an absentee ballot, and reach the polls. The most direct way of ensuring more equitable access is a federal mandate requiring on-reservation polling places and registration opportunities. Ensuring tribes can
designate a building whose address can be used to register, pick up, and drop off a ballot would also help. Additionally, Native voters often face issues regarding identification and lack of effective language assistance. Providing protections that ensure use of tribally issued IDs, and ballots made available in Native languages at the request of the tribal governments, are easy fixes with large effects.

Thank you for your consideration of these recommendations. We urge Congress to take swift action to include key voting rights protections for Native Americans in any legislation that moves forward.
Sincerely,