New Determination On Jurisdictions to Provide Language Assistance to Voters 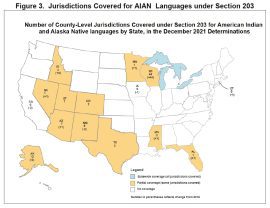 A number of states and political subdivisions identified in the Census determinations provide assistance in four covered language groups:

When a jurisdiction is covered by Section 203, generally all voting materials it provides in English should be translated in the language of all groups or sub-groups covered by the determination for all stages of the electoral process for “any type of election, whether it is a primary, general or special election.” Voting materials include voter registration materials, voting information provided by mail, publicity about the language assistance, ballots, and oral assistance at polling locations. 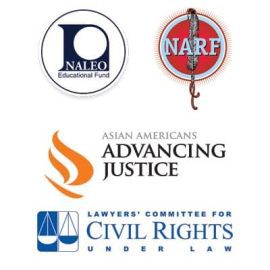 “The Section 203 language requirements are absolutely essential for many Alaska Native and American Indian communities that include Native language speakers. It is difficult, if not impossible, for Native American voters to participate in elections that do not include materials in their languages,” said NARF Staff Attorney Matthew L. Campbell. “Not providing adequate language accommodations hurts us as a nation by weakening the strength of our democratic processes and stifling Native voices. Therefore, we are pleased to see the increased coverage for Native languages, and NARF stands-by to assist Native voters and jurisdictions meet the Section 203 requirements.”

“Section 203 of the Voting Rights Act was designed to advance a simple principle—it is in the interest of democracy to do whatever possible to make it easier for eligible people to vote.  This statute does that by helping millions of citizens with limited-English proficiency overcome language barriers in the political participation process,” said Lawyers’ Committee for Civil Rights Under Law President and Executive Director Damon Hewitt. “Equal access under the law always has and will always be a top priority. Language assistance programs play a vital role in providing linguistic resources for language minority voters and supporting equitable access to the political process.”

“From the Northwest, to the Plains States, to the Midwest, to the Mid-Atlantic, to New England, the Latino population continues to grow and increase the diversity of our nation’s electorate.  The increase in the number of political divisions required to provide Spanish-language assistance in elections demonstrates the need to ensure that language is never a barrier to the right to vote for millions of Latinos,” said NALEO Educational Fund Chief Executive Officer Arturo Vargas. “While these coverage determinations will help ensure that elections are accessible to more of the nation’s Latino electorate, we remain deeply concerned by growing evidence of an undercount of Latinos in Census 2020, which could affect the quality of data in the American Community Survey that the Census Bureau will use to make future Section 203 determinations.  We urge the Bureau to carefully examine options to ameliorate the impact of such an undercount on future determinations and other data to ensure that the civil rights of Latinos are fully protected.”