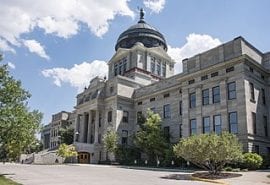 In the final weeks of the legislative session, Montana legislators passed two laws that will hinder Native American participation in the state’s electoral process. A lawsuit filed by the Native American Rights Fund (NARF) on behalf of the Blackfeet Nation, Confederated Salish and Kootenai Tribes of the Flathead Reservation, Fort Belknap Indian Community, and the Northern Cheyenne Tribe challenges two discriminatory voting laws: HB 176 and HB 530.

One of the new laws ends same-day registration (HB 176), which reservation voters have relied upon to cast votes in Montana since 2005. The other new law attempts to block organized ballot collection on rural reservations (HB 530), in spite of the thirteenth district court ruling unconstitutional a similar anti-ballot collection law in Western Native Voice v. Stapleton in 2020.

“These laws are an unconstitutional attack on the right of Native Americans to vote, and we look forward to proving it in court,” said NARF Staff Attorney Jacqueline De León.

The new laws show an ongoing pattern of anti-Native election-related legislation in the state. On a national level, when the Montana bills became law in May 2021, 13 state legislatures with sizeable Native populations had introduced over 100 bills that would disenfranchise Native voters.

“These laws are part of a broader scheme by the Montana legislature to attempt to cut out the Native vote. We stopped them before and we’ll do it again,” said NARF Staff Attorney Samantha Kelty.

Read more about this case and obstacles faced by Native American voters.