The Bering Sea Elders Group is an alliance of thirty-nine Yup’ik and Inupiaq villages that seeks to protect the sensitive ecosystem of the Bering Sea, the subsistence lifestyle, and the sustainable communities that depend on it.  NARF has designed a comprehensive plan to help this group of Alaska Native villages in their efforts to protect the area and become more engaged in its management.  Subsistence is the inherently sustainable Native philosophy of taking only what you need.  There are often no roads and no stores in rural Alaska, and so no other group of people in the United States continues to be as intimately connected to the land and water and as dependent upon its vast natural resources as Alaska’s indigenous peoples.

NARF has been working with the Elders Group in their negotiations with the bottom trawl industry.  These negotiations have resulted in the creation of a Working Group which will study various issues including seafloor habitat and subsistence uses of the area and make recommendations about changes that need to be made.

Today President Obama signed a landmark Executive Order creating the Northern Bering Sea Climate Resilience Area.  NARF congratulates our clients, the Bering Sea Elders Group, on on this historic news.  We are honored to work with the Bering Sea Elders Group and are proud of its incredible work to protect subsistence resources and promote tribal sovereignty and traditional knowledge.  Quyana for your advocacy and determination!

The Executive Order and accompanying map are available online.  Additional media resources, including statements from other organizations, maps, facts about the region, and photos are available here.

The Bering Sea Elder Group‘s press release is as follows: 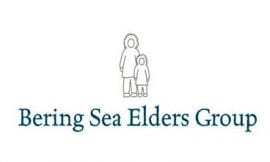 The Obama Administration announced today a landmark decision to create the Northern Bering Sea Climate Resilience Area. This unprecedented action is in direct response to the Tribes along the coast of the Bering Sea, who petitioned the President for this protection.  The Bering Sea Elders Group, with delegates from 39 tribes, passed a resolution as one voice and traveled to Washington, D.C. to ask the Administration for help. The Administration heard us and today issued an Executive Order that recognizes and respects the peoples of our region and our dependence on the Bering Sea.

In addition to the Bering Sea Elders Group, the White House action was requested by the two tribal consortiums collectively representing 76 tribes – Kawerak, Inc. and the Association of Village Council Presidents.

The Executive Order establishes an important set of policies aimed at protecting the people of our region and our subsistence way of life in the face of increasing effects of climate change. It also, for the first time, creates a formal role for Tribes in the decision making so as to ensure that our voices continue to be heard as we deal with the effects of climate change and increasing pressure on our resources. 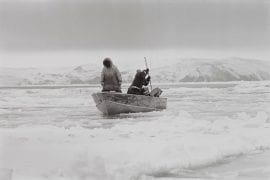 “It is my honor to thank President Obama for signing this Executive Order to help our Tribes,” said Harry Lincoln, Yup’ik elder from Tununak and Chair of Bering Sea Elders Group. “It is the Native elders’ vision that the northern Bering Sea and the resources that our people rely on be protected because they are the foundation of our culture and way of life. We have been here since time immemorial and it is our responsibility to pass our rich heritage on to future generations.”

The Northern Bering Sea and Bering Strait Region Climate Resilience Area represents a marine region that is vulnerable to ecological transformation and uncertainty due to warming ocean conditions. This rich and dynamic ecosystem is driven by the annual cycle of sea ice that forms in the fall and retreats in the spring. Traveling with the ice is one of the Earth’s largest migrations of marine mammals and birds, moving through the northern Bering Sea and the funnel of the narrow Bering Strait, to and from the Arctic Ocean.

But satellite and local observations of hunters show that the timing, duration, and extent of seasonal sea ice are changing, generating a host of ecological shifts:

“Whales, walruses, seals, and millions of seabirds travel by our islands and coastal villages. Our culture formed around this powerful phenomenon. It is where our stories come from, the foundation of our traditional knowledge,” said Frank Oxereok, the Elder Representative from Wales on the Bering Sea Elders Group, and one of the elders who traveled to Washington, D.C. in support of the President’s action. “I appreciate the President’s announcement because he really listened to us and understands what is at stake for our Tribes.”

The Executive Order: (1) establishes the boundaries of an area in which the federal policy is to enhance the resilience of our communities in the face of climate change, support our subsistence cultures, and make decisions taking into account “the rights and needs of the Alaska Native tribes”; (2) withdraws from consideration for oil and gas the Norton Sound Basin and a 25-mile buffer around St. Lawrence Island to protect hunting areas; (3) creates a federal task force to coordinate with the State, municipalities and corporations, as well as creates the first Intergovernmental Tribal Advisory Council to consult with and provide advice to federal agencies; (4) directs the consideration of indigenous knowledge in federal decision making; (5) enhances oil spill preparedness; and (6) directs the National Oceanic Atmospheric Administration (NOAA) to employ the policies protecting subsistence in this order when establishing or altering fishing practices, among several other provisions.

“The Native people in our region are experiencing climate change first-hand. Going forward, it’s important that we ‘do no more harm,’” said Charles Degnan, Elder Representative to the Bering Sea Elders Group from Unalakleet, and one of those who traveled to Washington, D.C. on behalf of the organization. “The Executive Order will help the ocean be more resilient to climate change, and help our people prepare for the future. We are doing this for our children and their inheritance.”

Others were keenly interested in the inclusion of indigenous knowledge and creating a real and robust role for Tribes. “President Obama recognizes our people’s need for self-determination. The Executive Order paves a way for Tribes to have a greater role in decision-making. And he is the first president to require that our traditional knowledge and expertise be applied to federal management decisions, answering a decades-long drum beat of our people,” said Fred Phillip, Executive Director of Bering Sea Elders Group. “This is real progress, and we wholeheartedly thank the President for working with us.”